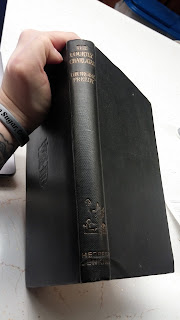 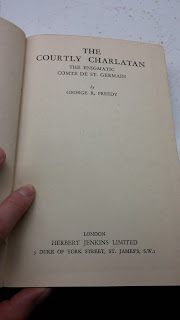 I just got a new book in the mail yesterday called The Courtly Charlatan.  It's listed in the Bibliography now.

Description of the Count from 1757:


M. de St. Germain appeared to be a man of about fifty years of age, with aquiline features, large dark eyes with a keen glance, a powdered peruke that concealed the scarcity or quantity of his hair, and a rich, distinguished costume that was yet well in the fashion.  His figure was subtle and well trained to execute all the gestures of courtesy, his manners were unexceptional; he was able to converse both with the King and with Madame de Pompadour without either confusion or awkwardness.

An aquiline nose is also called a Roman nose.

A peruke is a typical men's wig from the 18th century.

Page 24 refers to the Count's features as being "narrow". 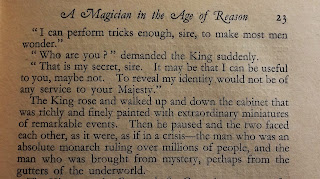 Page 28: St. Germain's personal secretary, "a man of the most perfect discretion", was named Zeffiro.  Equally as mysterious as the Count.  Is Zeffiro the man named Roger that we have previously heard of? Zeffiro took notes of society around him, including the King's court (page 30).  Page 54, Zeffiro publicly responds to the Count that he's only been in his service for the last 200 years.  Page 112, Zeffiro has flat features and brown eyes.

According to Ancestry.com, Zeffiro is a name of Italian origin.

Madame de Pompadour had several secret agents report back to her on the Count. 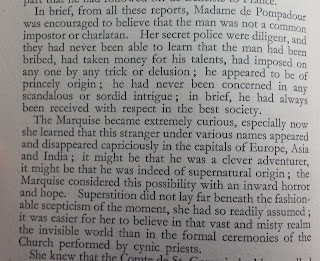 Known aliases listed throughout the book:
It mentions that he spent a long period of time in Bayonne, but there are no specific dates.  Some claim he had traveled to the East Indies and had lived with savages in the New World.  He traveled to the Amazon and Peru.  He hunted in the forest of Fontainebleau. 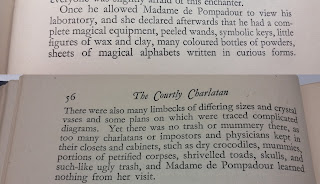 The entirety of Chapter 2 is a novelette in which the author sways the reader that St.Germain might be of Spanish origin.