Working on a Book

I have started writing a book on the Count.  I don't know how long it will take me to write it, but I do know that I might need to venture back over to Europe for research.

Might need some help getting some funding for that.
Posted by Jessie at 11:43 AM 2 comments:

Let me make a statement saying that while I came up with this theory, I don't really believe it (but sometimes it seems to make sense).  I was writing a 25-page paper on the Count for class and simultaneously collecting source material for my thesis paper on Vlad Dracula.  I also had a documentary playing on tv about the Knights Templar.

The Knights Templar, as you may know, started during the Crusades (the 12th century).  They were warrior-monks who claimed to protect travelers going to and fro Jerusalem (and surrounding areas).  In the beginning of the 14th century (1307 to be exact) the Knights Templar were spurned by the church and persecutions began to happen.  Knights were being burned at the stake, killed in a variety of ways, tortured...it was terrible.  During the two centuries that the Knights Templar were active, they were known to have acquired an exorbitant amount of wealth, a massive fleet of ships, and some legendary items like the Holy Grail and the Ark of the Covenant.  During the start of the Medieval inquisition that killed so many of the Knights, the Grand Master Jacques de Molay had the Templars pack up the fleet of ships and sent out Knights with the Templar treasure.  They went in all directions, the fleet was never found and most of the treasure was never recovered.


Above are a few common symbols of the Knights Templar.

Since the Templars went in all directions in order to hide their possessions and to escape persecution, its incredibly probably that some of them ended up in eastern Europe.  In fact, it doesn't take a genius to look at the Order of the Dragon to realize this.  The Order of the Dragon was started in the early 15th century (1408) and was a highly selective order that led many campaigns to keep the Ottomans out of Europe.  Below are the main symbols of the Order of the Dragon.  The dragon is from the story of St.George and the dragon.

Vlad Dracula was inducted into the Order because his father, Vlad II Dracul, was in the order.  By the age of 13, Vlad Dracula had completed his early knighthood training.  Dracula's education consisted of grammar, rhetoric, logic, Latin, astrology, philosophy, and mathematics. Students were encouraged to venture out to the countryside in order to learn about hunting, trapping, and other common going-ons in nature.  With his knighthood training he was taught swimming, fencing, jousting, archery, court etiquette, and horsemanship. Dracula had many tutors brought in by his father to ensure a fine intellect. Dracula learned Italian, possibly a little French, the humanities, the classics, and history from his first tutor. Dracula had probably picked up some Hungarian while in Transylvania and German, as well. He, of course, knew his native Romanian language since he needed it to command his future army. The royal scribes taught him the Cyrillic script, Slavonic, and Latin. Political theory was the “new science” being taught to the sons of princes, as well as the theory of divine right and the politics of raison d'etat.

Vlad Dracula and his younger brother Radu were given to the Sultan by their father as hostages, so the Ottomans wouldn't invade.  It was a shitty thing to do.  There's suggestions that they were molested and/or raped while with the Ottomans.  BUT, they were given a Muslim education.  They were given instruction in the Koran, the principles of Islamic theology, and Islamic law, with an emphasis on statecraft and military science instead of religion.  The liberal arts, physical exercise, manual training, and vocational training were also important constructs of a well-rounded Palace education.  Learning Turkish, Arabic, and Persian languages was very typical, as well as familiarizing one's self with the literature, history, and mathematics.  The physical exercise was a combination of gymnastics, olympic sports, and horsemanship.

Anyway, by his late-teens Vlad Dracula had escaped the Muslims and began his first reign (out of three) of Wallachia and Transylvania.  He was into absolute justice - you're either good or bad, no grey area what-so-ever.  If you were bad, usually you got tossed up onto a stake.  It was a scare tactic to force people into following the laws of the land...and it worked.  The people of Wallachia and Transylvania regarded him in a very positive way.  He has some Arthurian-like legends about him because he was so highly regarded.  He brought back the economy, he wanted to industrialize his lands, and he was excellent at keeping the Ottomans out of Europe (his lands blocked the Ottoman Empire from the rest of Europe).  There were also rumors that Dracula had acquired a mysterious treasure.

Hungary got really pissed off with Dracula because he was getting money from the Pope (Dracula wasn't Catholic, he was Orthodox).  Propaganda flew around until Dracula was kicked off the throne and essentially put on house arrest for somewhere around 12 years.  The Hungarian were terrible at keeping out the Ottomans, so Europe ended up with an invasion on their hands.  Dracula eventually had a short third reign where he supposedly died in battle.  Now at this time they did use some battle tactics such as look-a-likes.  As the story goes, Dracula's head was put into a jar of honey and taken to the Sultan, BUT no one has ever found the body of Dracula.  In his grave there were just some animal bones.  Whatever the case may be, everyone seems to agree that in December 1476/January 1477 he was severely injured from war and the people were informed that he was dead, though the location of where he died is still a mystery.

Here's where the theory starts to take off.

What if he was severely injured, but was taken to a secret place (lets just say a monastery because monks can keep quiet) to recuperate?  What if he retreated, after the announcement of his death, to where the Order of the Dragon held Templar treasure?  He was a very intelligent man and there's not a lot known about his time between his second and third reigns.  Could he have drank from the Holy Grail, eventually becoming the Count St.Germain?  A haircut and a shave could easily transform him into someone new.


Okay readers, what do you think?  Like I mentioned, I came up with it while in the middle of a bunch of writing projects for school.
Posted by Jessie at 8:15 PM 3 comments:

At one point, the Count owned "The Holy Family" by Murillo.  Baron von Gleichen reported this in his memoirs. If you glance over at the bibliography, you'll notice that it's grown a little bit.

The latest addition is of a book from 1863 called "Remarkable Adventurers and Unrevealed Mysteries".  If you check it out, go straight to Chapter 5!
Posted by Jessie at 10:23 AM No comments:

The first picture that I posted titled "St.Germain as Christian Rosenkrantz" was not able to be verified as an actual picture.  The person who posted it to their article on St.Germain simply said that they googled "St.Germain" and it came up.  I haven't been able to find it.  Despite it looking fairly similar, I have to completely disregard it.

The second picture was a mini-portrait from the 18th C that was sold at auction.  On the back is an old inscription announcing who it is.  I just want to find out who painted it and/or who previously owned it.  I'm going to keep this as an actual painting of the Count.
Posted by Jessie at 9:59 AM No comments:

I found a picture on a questionable site. Could this be a new picture of Count St.Germain? This website claims it's "St.Germaine as Christian Rosenkrantz". Holy Brother: The Lives and Work of Saint Germaine – Part 4

Here's another one that was up for auction. Aspire Auctions

A miniature oval portrait of Count de St. Germain set in inlaid carved ivory frame with tiny tortoise double banding at the outside of the frame. The oval portrait is surrounded by a small gilt metal tooled frame and has a convex glazing covering it; fit to hang on the wall. Backing has page from German dictionary and paper label inscribed "No.1/45 Comptez sur Msr Germents". Overall measures approx. 5-1/2" x 4-3/4".
Count of St. Germain (fl. 1710-1784) is best known as a recurring figure in the stories of several strands of occultism – particularly those connected to Theosophy and the White Eagle Lodge, where he is also referred to as one of the Masters of the Ancient Wisdom.
Condition: A few hair lines to ivory; not inspected out of the frame.

Added a picture to the gallery.  Its from Franz Gustav's "Recollections in Vienna". 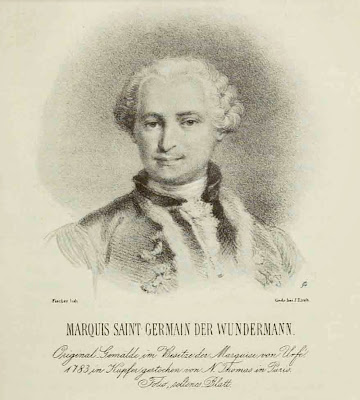 Posted by Jessie at 2:12 PM No comments:

You'll notice some new bibliography listings, the Friends tab above, and a new video post from earlier today.

Send in anything relating to Count St.Germain!


I've noticed a few references to the Count being part of the British Kit-Cat Club.  The club met in various locations in and out of London.  I found that Bloomsbury Bytes provides some good information, including this little tidbit:

“It was a rule of the club that members should have their portraits painted. Jacob Tonson, the famous bookseller, created the club and became its secretary. He made it a weekly gathering of litterateurs, whom he entertained with pies, making it a condition that his guests should sell him their manuscripts. Jonson started the portraiture and had his own picture painted by Sir Godfrey Kneller, the rest following suit. Jonson built a picture gallery as an addition to his villa at Barn Elms. The room was not large enough to take in half-length canvases, and a special size of portrait was invented, 36 inches by 28 inches, and the club became the sponsor of the Kit-Kat canvas, the name which still survives.” (Griffiths, p. 15).

I'm going to start looking for a portrait and possibly some writings.
Posted by Jessie at 3:00 PM No comments:

Listen to the music that was made by the Count.


Am I missing any theories?  I feel like I'm missing one.  Anyway...here are the three main ones that I know of with informational links.  Send me any info on other theories.  I have a half-baked idea of my own that I can't honestly say that I believe, but its not out of the realm of possibility.  Should I share it?  Let me know.
Posted by Jessie at 7:54 AM No comments:

This is a paper I wrote in 2011 for an independent study course.  Don't steal it.  Only disrespectful people steal stuff.

You can download it for free here:
The Influence of Count St. Germain on 18th Century France

You will also notice a visual list that I've started of the Count's friends and acquaintances.
Posted by Jessie at 10:10 AM No comments: